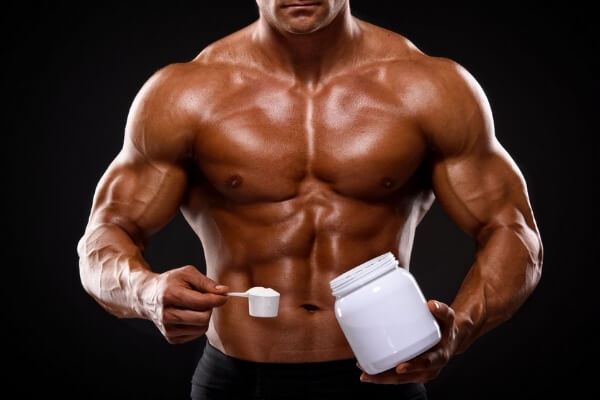 Creatine plays a role in generating ATP (adenosine triphosphate), which is responsible for most of your body’s energy production. This is particularly useful when your muscles need the energy for high-intensity exercise.

It’s a popular supplement with athletes, as creatine helps you to build muscle, gain strength and improve your physical performance.

Creatine Can Help You Build Muscle

Creatine can help you build muscle, both in the short and long term. It can be beneficial for a range of people, from athletes to relatively inactive people and even older adults.

A clinical trial involving older adults found that when they took creatine and undertook a weight-training programme, they substantially increased their leg strength and muscle mass.

In a study on weightlifters, researchers found that subjects increased their muscle fibre by 2–3 times when they took creatine over a period of 12 weeks, compared to participants who didn’t. They also doubled both their body mass and their one-rep max for the bench press.

Experts believe that creatine is more effective than any other supplement in helping you to accumulate muscle mass. (1)

Creatine Can Improve Your Performance

Creatine can also help you to step up your strength and power during high-intensity exercise.

In one study, reviewers found that when creatine was administered during a training programme, participants experienced up to 8% more strength, improved their weightlifting performance by up to 14%, and increased their one-rep max for bench press by as much as 43%.

In a 28-day trial, researchers found that athletes who took creatine increased their cycling performance by 15% and their bench press performance by 6%.

The training enhancements described above are due to the fact that creatine can increase your ability to produce ATP. ATP usually becomes diminished after 8–10 seconds of intense exercise. Creatine helps you produce more ATP, enabling you to perform at your ideal level for quite a lot longer. (2)

Creatine Can Help Your Cognitive Performance

Your brain also requires ATP to function at its optimum level.

Most of the research into the neurological benefits of creatine, however, has been performed on animals, rather than humans.

A trial in children with brain injuries, though, found that subjects experienced 50% less dizziness and 70% less fatigue when they took creatine. (3)

Creatine can also benefit older people and people with an elevated risk of neurological diseases.

Despite the benefits for older adults and those with a deficiency, creatine doesn’t appear to affect brain function in healthy adults.

The Ingredients of Creatine

There are three amino acids that make up creatine:

Your body synthesises most of the arginine that you need. It also occurs in foods such as fish, meat, dairy products, beans, and whole grains.

Indeed, research has shown that L-arginine can be beneficial in treating conditions such as angina, high blood pressure and erectile dysfunction. (4)

Your body produces glycine from other amino acids, and it also occurs in most protein-rich foods.

Glycine is a component of glutathione which protects your cells from oxidative damage caused by free radicals.

It’s also the most abundant amino acid in collagen which is essential for the health of your muscles, skin, and cartilage.

Research has shown that glycine may also help improve your sleep quality by lowering your core body temperature.

Glycine may also prevent atherosclerosis (hardening of the arteries) by blocking the build-up of a certain compound. And it can help you to utilize nitric oxide (NO) which increases blood flow and can also decrease your blood pressure.

Additionally, if you have higher glycine levels you may reduce your risk of type 2 diabetes, even allowing for lifestyle considerations.

Glycine may also help reduce muscle wasting, which can occur due to age, poor nutrition, or stress.

This decrease in muscle mass and strength can potentially cause other related conditions, research has shown. (5)

You need to include methionine in your diet because your body is unable to synthesise it.

Additionally, methionine helps to start the production of new proteins in your muscles after they’re damaged from a workout. (6)

Thorough research has shown that creatine does not have any serious detrimental side-effects.

However, if you have a pre-existing liver or kidney condition you should consult a medical professional before you take it.

Creatine has been linked with cramps and dehydration, but research doesn’t support this and shows that it may, in fact, reduce cramps from intense exercise. (7)

Creatine supplements occur in the form of creatine monohydrate, which is the most effective of the creatine compounds.

You take creatine via a ‘loading’ process. Initially, you take 0.3g per kg of bodyweight per day for 5–7 days. Then you would take at least 0.03 g per kg per day for three weeks (if you’re cycling your dose) or for as long as you like.

Stomach cramps may occur if you take creatine without enough water. Additionally, if you take too much creatine at once, it may cause diarrhoea. To avoid this, you should spread your servings throughout the day and consume them with your meals.

We’re an independent resource. We want to provide simple, actionable posts that are based on science. Helping consumers make informed decisions about the supplements they take.